We all have dreamt of making 1INR=1USD at least once in our life. You may also have doubts  as to why INR and USD have different values. What if it actually happens?

There are two possibilities: 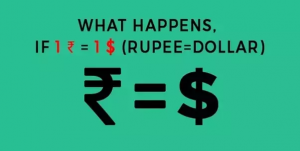 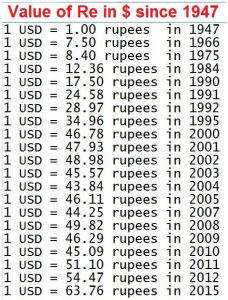 Firstly, no company will pay him $75,000 when they can hire someone else for $3000 in the US. So Indians from various occupations will be affected. They might get fired from their jobs. Companies will move out of the country, because they can hire employees at an affordable salary. For certain jobs like cleaning, people would rather invest in a vacuum cleaner worth $1000, than paying someone $4000 per month. Companies would find tech. An efficient robotic vacuum cleaner worth $1000 would be used rather than the $4000 pm human cleaner. As people get removed from the jobs, plenty of other jobs that rely on them (restaurants, retail shops, airlines and the like) will also be affected.

As people get fired, they will eventually work for lower and lower salaries, until their income drops below the international level of $2500(say). Since 1 USD = 1 INR, that would make great engineers also earn Rs.2500 per month. But earning Rs. 2500 per month will only make things difficult. They can’t afford to pay lakhs of rupees of loans for houses, cars, etc, borrowed from the banks. So the banks with huge unpaid loans, would go bankrupt. Investors would also exit. Even if the government prints a lot of money to keep the banks alive, that would raise up the inflation and decrease the value of the rupee so low that things get back to Rs. 60 = 1 USD. At that point, the Indian’s wage will be so low that jobs will move back again and the cycle would continue.

The other scenario is, on average an Indian employee would get 1lakh INR (=1lakh USD). Whereas a U.S. employee would get 54000 USD. Consequently, this increases the cost of the products made in India. People would look for buying imported products. Equally, this results in the closing down the Indian companies. This will have a huge impact on the employment of India. Tourism will also be affected. This will result in an enormous decrease in GDP as there is no production from different fields like mining, agriculture, etc.

This is the reason why RBI is very careful not to let rupee’s value increase. It is for our own benefit that $1 equals Rs.60. It helps keep exports high, wages high and imports low of cost.

Obviously if a country can earn more from exports than imports, then it’ll be in a good position.

GRADUAL WEAKENING OF USD AND STRENGTHENING OF INR

For this to happen, inflation in our country should be less than inflation in the USA. Let’s consider the previous situation where currently an Indian is earning Rs.75000 pm and an American is earning 3000 USD pm. After 100 years, if the Indian still earns Rs.75000 pm while on the other side, due to America’s inflation if the average income of an American increases to $75000, then $1 =Rs.1. In reality, this is really too hard to come true.

Another way is, if a new currency is introduced in India say, NIR(new Indian rupee) such that 1NIR=100INR. After demonetizing the current INR to NIR, there will be changes in salaries, prices of the products. So if a person is earning 1 lakh(INR), will be earning only 1000NIR now. This will make 1NIR=1.4USD. It seems India has become richer than America but nothing changes. Because only the measure of units changed but the value will be the same as before. 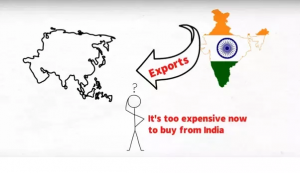 The strength of the currency mainly depends on the productivity of the country. If Indian employees can produce at a higher rate than foreign employees, then India will become stronger and richer than other countries. America’s productivity is greater than India’s, thus they are in a superior position. Productivity in India is lesser because of the low literacy rate, by which there are lesser companies which contribute to the country’s productivity. Laptops are available at a cheaper rates in America than in India. As India imports laptops from America, the cost adds up with the taxes like service taxes, transportation charges and other counterparts. So if we can manufacture more products in India, we can afford the products at a cheaper rate and our standard of living will increase.

What we can do to strengthen our currency:

A Huge Stink on the Brink? 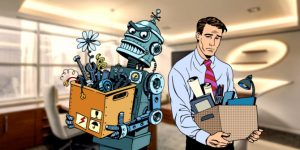 Jobs in the future and skills required