What is wireless charging?

Most of you must have heard about Faraday’s Law back in school or at pre-university. Wireless charging is an application of Faraday’s Law.

Apple’s iPhone 8, iPhone X and Samsung’s Note10 series include wireless charging, so there’s no need to reach for a cable and charging point any longer. How does this work, what supports it and is it any faster? Let’s find out.
Wireless charging has been around since the late 19th century without any practical applications, until electricity pioneer discoverer Nikola Tesla demonstrated magnetic coupling – the power to transmit electricity through the air by creating a field between a transmitter and a receiver.
Wireless charging is making inroads into automotive and manufacturing industries because it offers increased mobility and advances that might allow tiny internet of things (IoT) devices to get charged many feet off from a charger.

How does this work?

Wireless charging works on the principle of transferring energy from the charger to a receiver within the back of the phone via electromagnetic induction (EMI). The charger uses an induction coil to create an alternating time varying electromagnetic field, which the receiver coil in the cell-phone converts back into electricity to be fed into the battery. The image below shows how this is done. 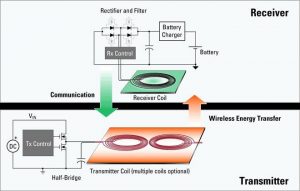 There are mainly three types of wireless charging.
1: Charging pads that use tightly-coupled electromagnetic inductive charging.
2: Bowl type chargers that use loosely-coupled electromagnetic resonant charging that can transmit charge only a few centimetres.
3: Uncoupled Radio Frequency (RF) wireless charging that allows triple charging capability at distances of many feet.
Wireless charging also referred as Inductive charging is based on magnetic fields as seen in above picture. These fields are often strong but have a brief range of effect unless a very large source of magnetism is accessible.

Inductive charging also has few problems like speed of charging and efficiency. Attempting to charge a device using induction charging isn’t as efficient as a direct physical connection. The lack of standardization is another reason why wireless charging never gained much traction in consumer electronics.

It wasn’t long ago that most devices still relied on Ethernet cords for data and broadband was restricted to ridiculously slow speeds. Wireless charging didn’t seem important before wireless communications.
This has changed, thanks to the Wireless Power Consortium and its Qi (pronounced as “chee”) standard. The WPC is an industry organization sponsored by various companies, everyone seeking a standard for wireless charging.
There is definitely a future for wireless charging. There’s plenty of industry support behind WPC and a strong desire to bring the feature to promote and make it a huge product.
The Wireless Power Consortium is continually searching for better options. Recently Intel announced that it is working with Integrated Device Technology on a magnetic device that would be placed inside the laptop and deliver power to nearby smartphones and other peripherals.

Research on Wireless charging is increasing day by day and it is going to be in great demand in the coming future. Wireless charging has huge potential.
Lastly if we could move power without wires we’d be able to re-think not just consumer electronics but also the infrastructure utilised by the whole humankind.

The Dirty Side Of Clean Energy

How Do Clinical Trials Work?