A Bluetooth controlled 3-D printed 5 degrees of freedom robotic arm that can be controlled using a mobile application. AutoCAD and Catia V5 to be used to design the robot. The robot will use Arduino Uno as an electronics platform. 3 SG90 and 3 MG996R servo motors to be used at the joints. MIT app inventor to be used for mobile application where servo motors can be controlled by the user. The application is user-friendly. The robot will have a memory so that it can execute previously defined motions so that it can be used in assembly-line manufacturing.
Using the sliders in the app we can manually control the movement of each servo or axis of the robot arm. Also using the “Save” button we can record each position or step and then the robot arm can automatically run and repeat these steps. With the same button we can pause the automatic operation as well as reset or delete all steps so that we can record new ones.
For making the circuit, we need Arduino UNO, HC-05 Bluetooth module for communication with the smartphone and servo motors. The control pins of servo motors are connected to 6 digital pins of Arduino UNO. For powering the servos we need 5V which comes from an external power source since Arduino cannot handle the amount of current all of them can draw. The power source must handle at least 2A of current.
In the Android Application, at the top we have two buttons for connecting the smartphone to the HC-05 Bluetooth module. Then on the left side we have an image of the robot arm, and on the right side we have the six sliders for controlling the servos and one slider for the speed control. Each slider has different initial, minimum and maximum value that suits the robot arm joints. At the bottom of the app, we have three buttons, SAVE, RUN and RESET through which we can program the robot arm to run automatically. There is also a label below which shows the number of steps we have saved.

Robotic Arm is designed which can be controlled via bluetooth using an application in mobile phone. It has memory to remember the steps and repeat the saved steps which makes it autonomous. 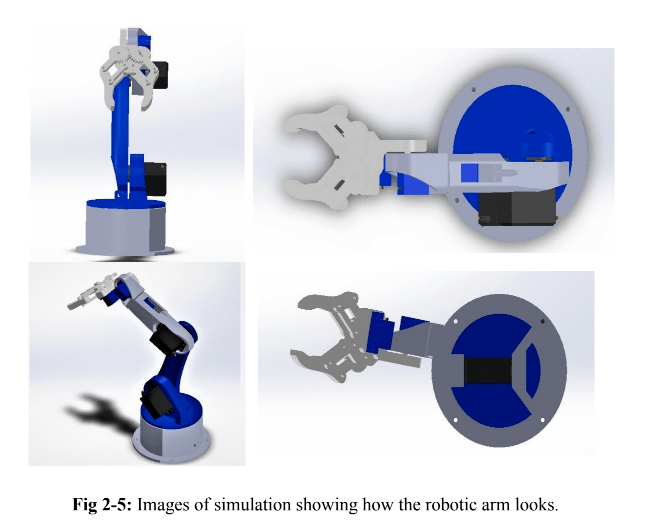 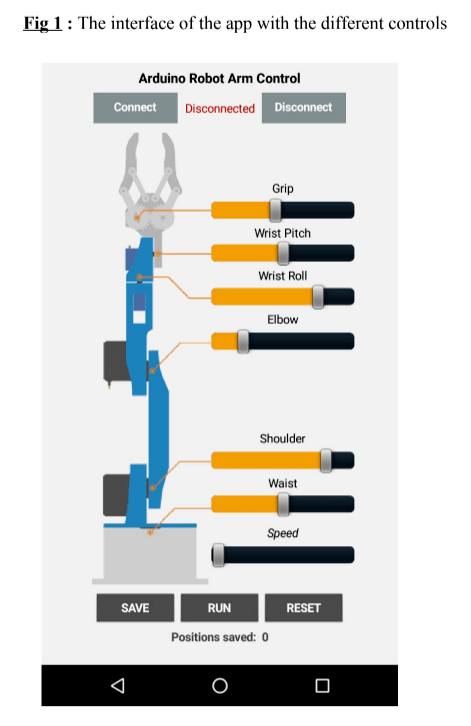 The project involves a robotic arm which is currently controlled through bluetooth by a mobile application. In the future, image processing could be implemented with the robotic arm to enable it to detect and interact with objects based on it’s features such as shape, colour etc. Moreover, dedicated tasks such as picking up an object and placing it in a different location can be automated too instead of manually operating it.