Design and implementation of hardware for UART data transmission on a Spartan-7 FPGA. The UART protocol is selected for its relative simplicity and popularity. The Spartan-7 FPGA board has a number of I/O pins that are suitable over a range of voltages and was hence suitable for this project.

The UART receiver and transmitter were implemented independently. We used 9600 BAUD rate for transmission of serial data and divided the system clock accordingly. We followed the Finite State Machine (FSM) approach to design both UART transmitter and receiver. These FSMs were then written in Verilog following RTL Design and implemented on the Spartan-7 FPGA board.

UART exchanges text data in an American Standard Code for Information Interchange (ASCII) format in which each alphabetical character is encoded by 7 bits and transmitted as 8 data bits. For transmission the UART protocol wraps this 8 bit subword with a start bit in the least significant bit (LSB) and a stop bit in the most significant bit (MSB) resulting in a 10 bit word format. 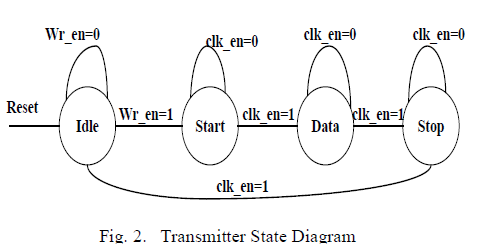 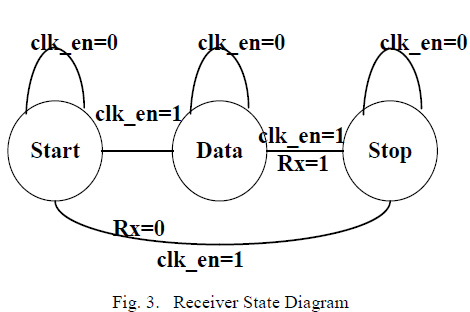 The testbench created verified the proper functioning of the Verilog Code for both Transmitter and Receiver. The below graph shows the results of the testbench. A small delay between transmission of data and its reception was artificially introduced to simulate real-world implementations.

Detailed understanding of the working of various data transmission protocols, not just UART. The inner functioning of an FPGA and ways to use its fundamental units to optimize designs. Design of digital systems using Verilog.

The FPGA is a versatile device with the potential to be a part of a number of projects. This project simply scratches the surface of its many uses and further projects involving the FPGA can integrate this project to allow the FPGA to interface with multiple peripherals.